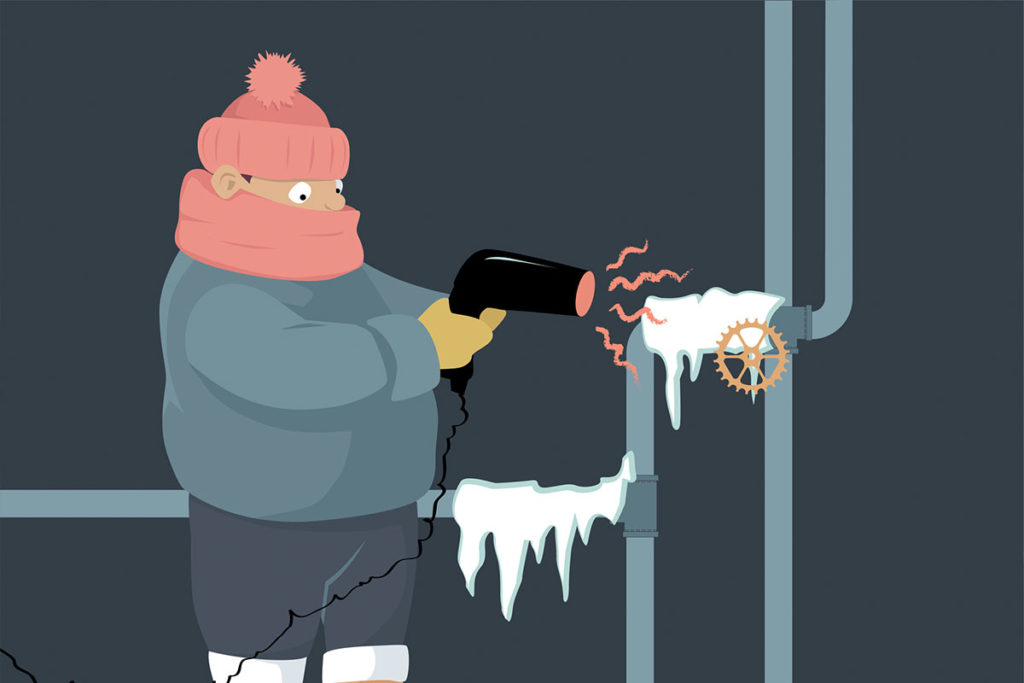 This goes without saying, but frozen pipes aren’t the same thing as burst pipes! So how do you identify the first thing, to prevent it from turning into the disastrous second thing?

Well, the easiest way is by just eyeballing visible plumbing pipes, and noting whether they look bulged.

The reason why a frozen pipe swells is because, as you probably learned in chemistry class, water expands when it freezes. Similar to how almost everyone has a story of putting a can of Coke in the freezer to cool it down faster…but then they forgot about it, and it exploded!

The difference is, that doesn’t cause thousands of dollars worth of damage, whereas burst pipes do…

As you probably know, not all your plumbing pipes are easily visible to you. If they’re under the sink, it’s easy to see if it’s bulged or if there’s frost on the outside of it. But what are some of the symptoms of frozen pipes, when it comes to the pipes you can’t see?

Of course, one of the major signs is if you go to turn the water on, and no water, or only a little water, comes out. But another symptom that you may not have known about is if there’s a weird smell coming from the drain/faucet!

The first pipes you want to check for freezing are those along the exterior of your home, if there are any (which, of course, most builders here in Illinois knew better than that)! This goes for pipes in attics and basements too, especially if your basement is unfinished and not properly insulated. These pipes usually won’t get the same amount of heat.

If you’re sure that your pipe is just frozen, and NOT burst, then you can try and thaw it yourself:

(This assumes you can find and access the frozen pipe.)

If it’s closed, the steam and water generating in the frozen pipe as it thaws will have nowhere to go.

2. Know which heat sources are safe, and which are dangerous!

A space heater is fine, but make sure you don’t leave it around flammable objects. Also, it’s surprisingly OK to wrap a heating pad around the pipe, or to use a hair dryer. (Just make sure to prevent electronic parts from getting wet.) You can also use hot towels and wrap those around the pipe. But don’t use any “open flames” to heat the pipe!

3. Check if water flow has returned to normal.

Keep in mind, we just want to reiterate that you should only be thawing the frozen pipe yourself if you are 100% confident that it’s NOT burst anywhere. Otherwise, you could be the one causing thousands of dollars of damage to your home!

If you do suspect a burst pipe or leak somewhere, or you’re not sure you’ll be able to thaw your pipes properly, or you’re afraid there’s a frozen pipe somewhere you can’t see or get to, then it’s better to call in the experts.

While we don’t offer plumbing, we’re experts in all your other winter-weather needs, from furnaces to heat pumps.

We’re happy to answer any and all of your questions! Just give us a call at 618.217.1836, or click here to schedule service online.

COVID-19 Message
The HVAC System of the Future Will END All Arguments About Your Thermostat!

Are you constantly arguing with your family members about what temperature the thermostat should be? This HVAC system will end that for good ... An...