Geothermal systems, such as geothermal heat pumps, run on geothermal energy to heat and cool your home. What is geothermal energy anyway? It is a clean, energy-efficient, and renewable source of power that is harnessed from the internal heat trapped beneath the earth’s crust. Although the earth’s core is estimated to be about 10,800 degrees, just below the surface it is a constant 50 to 60 degrees. A geothermal heat pump takes advantage of this energy to heat and cool your home.

Geothermal systems are becoming a popular home heating and cooling option for homeowners in the Metro East area and throughout the United States, but it’s already a popular source of energy in many places. In fact, Iceland already takes advantage of this resource, generating over 25 percent of their country’s energy from geothermal resources!

But how exactly does energy go from below the earth’s surface and turn into heating and air conditioning? Science!

The History of Geothermal Energy

Long before electricity was invented, ancient people harnessed the power of direct geothermal energy without needing to dig deep reservoirs beneath the Earth’s surface. Over 2,000 years ago, the ancient Romans used naturally occurring hot springs and hot pools to bathe, heat their homes, and cook with. They believed that hot springs were places of the Gods and contained special powers. In the Americas, the Sioux and Cheyenne tribes frequently bathed in hot springs for their purported healing powers. Then in 1892, the first modern district heating system was developed in Boise, Idaho. It worked to heat buildings by piping water from hot springs to heat buildings. It’s actually still in use today, over a century later!

How Geothermal Heat Pumps Work in Your Home

Geothermal systems are made up of two main parts: the geothermal heat pump unit that goes inside the home, and a series of underground pipes, or “ground loops” that are installed in the ground below the frost line. Heat pumps don’t generate heat, but they transfer it from one place to another.

Would you believe that you already have a type of heat pump in your home? Refrigerators work in a similar way; they pump the warm air out, where it comes in contact with a closed loop of freezing cold coils, and then returns the cold air to the refrigerator. That’s why you can feel warm air coming from behind your appliance!

Geothermal heat pumps work in a very similar way. A type of antifreeze is pumped through the ground loops, and transfer heat. If the antifreeze is warm when entering the ground, it is cooled to the ground temperature and returns to the house. During the cold winter months, geothermal systems are able to absorb the heat that is stored beneath the ground. When the solution enters the ground cold, the same process works in reverse, steadily warming it up to the ground’s temperature of 50 to 60 degrees. From there, it is piped into the unit in your home to another set of coils. Then, air runs across the device’s hot or cold coils and is pumped through the home’s ductwork. Voila! 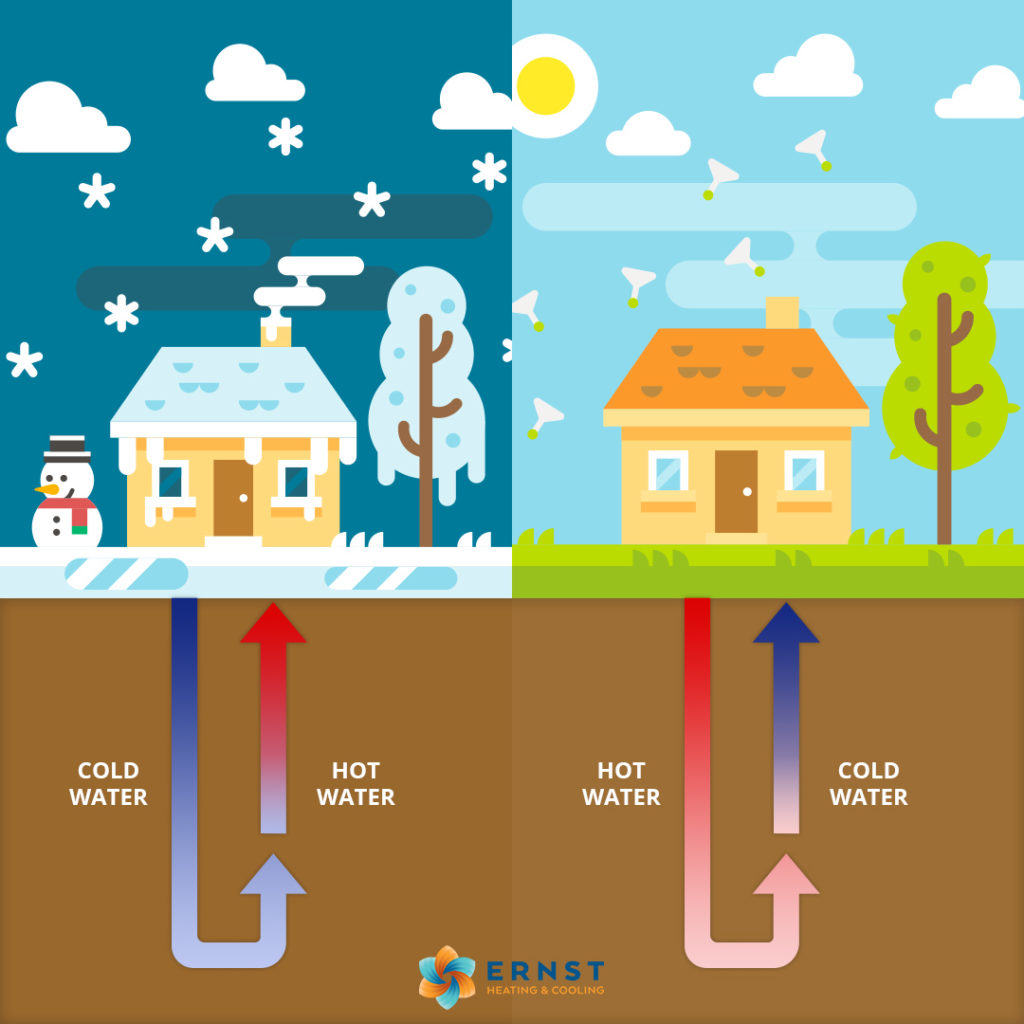 Geothermal energy has great advantages over other energy sources, including:

Geothermal heat pumps can be an excellent home heating and cooling option for your family. For homeowners in the Metro East Illinois area, let Ernst Heating and Cooling answer any lingering questions you have about geothermal systems!

Contact Ernst Heating & Cooling online or give us a call at 618 887-6093 to learn more about our geothermal heat pump services in the Metro East area!